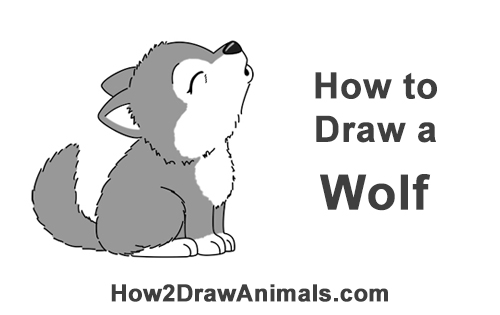 Please PAUSE the "How to Draw a Wolf Howling (Cartoon)" video after each step to draw at your own pace. Step 1: Draw a small, curved vertical line for the cartoon wolf pup's closed eye. Sketch lightly at first and darken the line after you get the size and shape right. Make the line thick and add two pointy ends at the bottom for the eyelashes. Add a thinner, curved line on the left side for the eyebrow. Draw a few tiny lines on the right for fur. Step 5: On the bottom, left side, draw an angled line similar to a big less-than sign (<) for the wolf pup's ear. Draw a few lines within the shape of the ear to give it more structure.